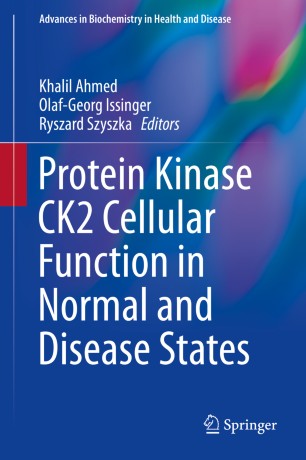 Part of the Advances in Biochemistry in Health and Disease book series (ABHD, volume 12)

The field of protein kinases has greatly impacted our understanding of the basic mechanisms in cell function. The field has also been a major focus of drug development that considers the broad reach of the protein kinase function under diverse conditions. One member of the kinome, protein kinase CK2, continues to emerge as a major signaling molecule involved in diverse functions in health and disease. This kinase has unique features, most notably its ubiquitous and highly conserved nature. Its vast number of potential substrates exemplifies its involvement in various functions in cells under both the normal and diseased states. Of particular note is the observation that due to its ubiquitous nature, CK2 has been found to be dysregulated in all cancers that have been examined. As such, it is now being considered a potentially important target for cancer therapy.

Protein Kinase CK2 plays equally important functions in development and intracellular activities, and has a global impact on cell growth and proliferation. An additional key function of CK2 is the impact of its activity on cell death processes. Given the vast nature of its functions, CK2 has been proposed to serve as a “master regulator” of cell function. The chapters included in this work cover a wide range of topics dealing with some of the functions mentioned above, providing an important starting point for research investigators and graduate students interested in this field.