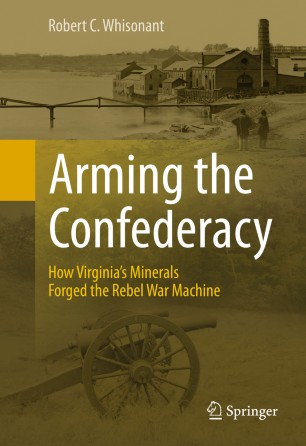 This is a fresh look at the American Civil War from the standpoint of the natural resources necessary to keep the armies in the field. This story of the links between minerals, topography, and the war in western Virginia now comes to light in a way that enhances our understanding of America’s greatest trial. Five mineral products – niter, lead, salt, iron, and coal – were absolutely essential to wage war in the 1860s. For the armies of the South, those resources were concentrated in the remote Appalachian highlands of southwestern Virginia. From the beginning of the war, the Union knew that the key to victory was the destruction or occupation of the mines, furnaces, and forges located there, as well as the railroad that moved the resources to where they were desperately needed. To achieve this, Federal forces repeatedly advanced into the treacherous mountainous terrain to fight some of the most savage battles of the War.

A native of Gaffney, South Carolina, Robert C. Whisonant holds degrees in geology from Clemson University (B.S., 1963) and Florida State University (M.S., 1965, Ph.D., 1967). He has authored or co-authored over 100 professional publications and consulted on a number of engineering geology projects and in 1993 won the Neil Miner Award given by the National Association of Geology Teachers for outstanding university-level teaching in the United States. He also received Radford University’s Professorial Excellence Award in 2000 and in 2002 was given the Outstanding Faculty Award by the State Council of Higher Education in Virginia.

Dr. Whisonant’s current research includes developing the connections between geology and the American Civil War campaigns and battles. He has analyzed the effects of geology and topography on casualty rates on national battlefields such as Gettysburg, Chancellorsville, and Antietam. He also directed projects involving mapping and preservation of Civil War battlefield features at Saltville, Virginia, where the work was supported by NASA and the National Park Service (American Battlefield Protection Program).

“This is a well-produced and well-priced book, and I would recommend it to anyone with an interest in the topic. It draws upon many useful sources and adds its own to the literature of the America Civil War—and of the application of military geology.” (Geology Today, Vol. 32 (1), January-February, 2016)

“Provides much useful information about the role of the western part of the state in that divisive war 150 years ago.” (George Kegley, The Roanoke Times, roanoke.com, June, 2015)