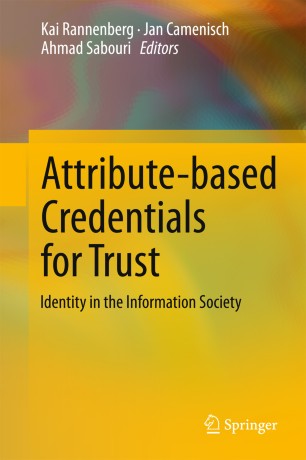 Identity in the Information Society

This book addresses the federation and interchangeability of Privacy-ABC technologies. It defines a common, unified architecture for Privacy-ABC systems that allows their respective features to be compared and combined Further, this book presents open reference implementations of selected Privacy-ABC systems and explains how to deploy them in actual production pilots, allowing provably accredited members of restricted communities to provide anonymous feedback on their community or its members. To date, credentials such as digitally signed pieces of personal information or other information used to authenticate or identify a user have not been designed to respect the users’ privacy. They inevitably reveal the identity of the holder even though the application at hand often needs much less information, e.g. only the confirmation that the holder is a teenager or is eligible for social benefits. In contrast, Privacy-ABCs allow their holders to reveal only their minimal information required by the applications, without giving away their full identity information. Privacy-ABCs thus facilitate the implementation of a trustworthy and at the same time privacy-respecting digital society.

"The ABC4Trust project as a multidisciplinary and European project, gives a technological response to questions linked to data protection."

Kai Rannenberg holds the Deutsche Telekom Chair of Mobile Business & Multilateral Security at Goethe University Frankfurt, Germany. Before he was with Microsoft Research Cambridge, UK, focussing on personal security devices and privacy technologies. Kai has been coordinating several leading EU research projects including the Network of Excellence “Future of Identity in the Information Society” and the Integrated Project “Attribute based Credentials for Trust” (ABC4Trust). Kai`s awards include the IFIP Silver Core and the Alcatel SEL Foundation Dissertation Award.

Jan Camenisch is a globally renowned cryptographer and a senior researcher at IBM's Research Laboratory in Rüschlikon, Switzerland. His mission is, by inventing and using cryptography to try to regain the fading privacy of our increasingly electronic society. He is a member of the IBM Academy of Technology and was the technical leader of the EU-funded projects PrimeLifePRIME and currently holds an ERC Advanced Grant. In 2010 he received the prestigious ACM SIGSAC Outstanding Innovation Award and in 2013 the IEEE Computer Society Technical Achievement Award.

Ahmad Sabouri is a scientific researcher and doctoral candidate at the Deutsche Telekom Chair of Mobile Business & Multilateral Security at Johann Wolfgang Goethe University Frankfurt, Germany, with a focus on Privacy-respecting Identity Management. Since 2011, he has a key role in various activities within the ABC4Trust EU project, including project coordination, architecture design, and management of the pilots.