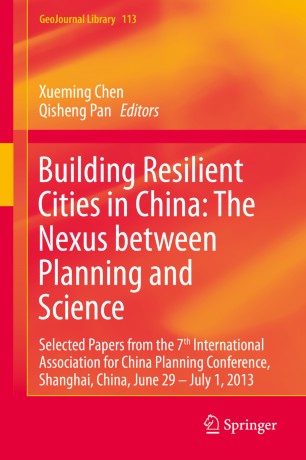 Building Resilient Cities in China: The Nexus between Planning and Science

This book discusses a range of planning and management issues related to building urban resiliency. It covers such topics as urban, environmental, and transportation planning, historical preservation, emergency relief and management, geographic information systems (GIS) and other technological applications. The book includes case studies of several cities and districts in China, including Shanghai, and a number of cities in the United States of America.

Urban resiliency in the face of uncertainty is a priority for planning and governance in communities worldwide. In China, which has suffered many of the world’s most devastating floods, earthquakes, and typhoons, preparing for the threat of disaster has long been an important planning objective. Recent calamities, such as the 2008 Winter Storms, the 2008 Wenchuan Earthquake, and the 2012 Beijing Floods have only made planning for resiliency more urgent. As planners work to prepare for such events, interdisciplinary collaboration becomes increasingly important. Planners need the tools and insights offered by other fields, including both the natural and social sciences. At the same time, these interdisciplinary relationships help shape the identity of urban-rural planning in its new role as one of China’s primary academic disciplines. Thus, the nexus between planning and science is critically important in building resilient cities in China, and the Chinese planning experience can serve as an example to and benefit countries around the world.

Xueming Chen received his Ph.D degree in urban and regional planning from University of Southern California. He is currently serving as the associate professor of urban and regional planning program, L. Douglas Wilder School of Government and Public Affairs at Virginia Commonwealth University. His research interests include transportation planning, transportation modeling, and geographic information systems. He was the Chair of Board of Directors, International Association for China Planning (IACP) from 2011 to 2013.

Qisheng Pan is a Professor and Chair in the Department of Urban Planning and Environmental Policy at Texas Southern University. Dr. Pan received a Ph.D. in Urban Planning from the University of Southern California (USC) in 2003 and a Master’s degree in Computer Science from USC in 2001. He also held a Master’s degree in Cartography and Remote Sensing and a BS in Geology from Peking University. Dr. Pan's research focuses on multiple aspects of urban planning, including transportation planning, economic impact analysis, and the applications of GIS in urban planning. He has received research grants from Texas Department of Transportation (TXDOT) to measure access to public transit services and to examine port-related traffic and emissions. He has also studied on the economic impacts of terrorist attacks on Central Business Districts and infrastructures in large metropolitan areas. Recently he received the Natural Resources Imagery Grant from ESRI to utilize SAR imagery technology in pipeline integrity management. Dr. Pan has consulted in multiple research projects from National Science Foundation’s Digital Government Program and Department of Homeland Security. Dr. Pan is serving as the Chair of the Board of Directors (BOD) for the International Association for China Planning (IACP), 2013-2015.