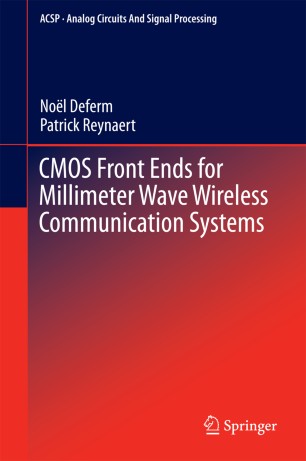 This book focuses on the development of circuit and system design techniques for millimeter wave wireless communication systems above 90GHz and fabricated in nanometer scale CMOS technologies. The authors demonstrate a hands-on methodology that was applied to design six different chips, in order to overcome a variety of design challenges. Behavior of both actives and passives, and how to design them to achieve high performance is discussed in detail. This book serves as a valuable reference for millimeter wave designers, working at both the transistor level and system level.

Noël Deferm (S'09) was born in Diest, Belgium, in 1985. In 2008 he received the degree of M.S. in Electrical Engineering (ir.) from the Katholieke Universiteit Leuven (K.U.Leuven), Belgium. The subject of his MS thesis was on the design of ultra low-power architectures for wireless sensor networks.
He is currently working as a postdoc researcher at the MICAS laboratories of the department of Electrical Engineering (ESAT) of the Katholieke Universiteit Leuven (K.U.Leuven) from which he received the Ph.D. in Engineering Science (dr.) in 2014. While working towards his Ph.D. degree, his main research focus was on mm-wave CMOS circuit design for wireless communication systems.
In 2011, he received the TSMC-Europractice innovation award.

From 2001 to 2006, he was a Teaching and Research Assistant within the MICAS research group of the Department of Electrical Engineering (ESAT), K.U.Leuven, Belgium. While working towards his Ph.D. degree, his main research focus was on CMOS RF power amplifiers and analog circuit design for mobile and wireless communications. From 2001 to 2006, he was also a Lector at ACE-Group T Leuven, Belgium were he teached several undergraduate courses on electronic circuit design.

During 2006-2007, he was a post-doctoral researcher at the Department of Electrical Engineering and Computer Sciences of the University of California at Berkeley. At the Berkeley Wireless Research Center, he was working on mm-wave CMOS integrated circuits within the group of Prof. Ali Niknejad. For this research, he received a Francqui Foundation fellowship from the Belgian American Educational Foundation.

During the summer of 2007, he was a visiting researcher at Infineon, Villach, Austria where he worked on the linearization of basestation power amplifiers.

Since October 2007, he is a Professor at the Katholieke Universiteit Leuven, department of Electrical Engineering (ESAT) and a staff member of the ESAT-MICAS research group. His main research interests include mm-wave CMOS circuit design and RF power amplifiers.

In 2011, he received the TSMC-Europractice innovation award. In 2011-2012, he served as the Guest Editor for the IEEE Journal of Solid-state Circuits Special Issue on ESSCIRC 2011.