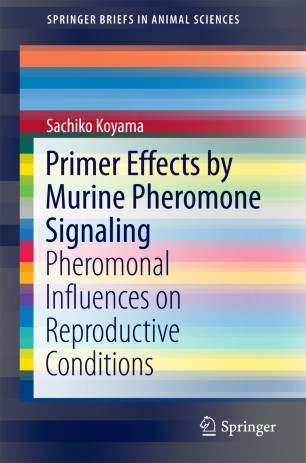 Part of the SpringerBriefs in Animal Sciences book series (BRIEFSANIMAL)

This SpringerBrief provides a concise summary on the chemistry and function of murine pheromones in reproduction. It discusses mechanisms of action as well as the applicability of these mechanisms to humans. The image of pheromones is usually some invisible mysterious chemicals that make people attracted to the opposite sex.  However, pheromones have many functions and one that perhaps is not well known yet is that they affect the reproductive status of others. Males’ pheromones stimulate females’ reproductive status and vice versa. This book will present studies on male mice which is rarely covered and will also discuss trans-generational influences of pheromones. The book addresses Professors, researchers and students working in animal neurochemistry, chemical signaling and reproductive medicine.