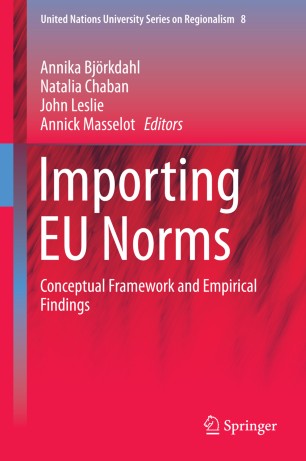 This interdisciplinary work presents a conceptual framework and brings together constructivist and rationalist accounts of how EU norms are adopted, adapted, resisted or rejected. These chapters provide empirical cases and critical analysis of a rich variety of norm-takers from EU member states, European and non-European states, including the rejection of EU norms in Russia and Africa as well as adaptation of EU practices in Australia and New Zealand. Chapters on China, ASEAN and the Czech Republic demonstrate resistance to EU norm export. This volume probes differences in willingness to adopt or adapt norms between various actors in the recipient state and explores such questions as: How do norm-takers perceive of the EU and its norms? Is there a ‘normative fit’ between EU norms and the local normative context? Similarly, how do EU norms impact recipients’ interests and institutional arrangements? First, the authors map EU norm export strategies and approaches as they affect norm-takers. Second, the chapters recognize that norm adoption, adaption, resistance or rejection is a product of interaction and a relationship in which interdependence, asymmetry and power play a role. Third, we see that domestic circumstances within norm-takers condition the reception of norms. This book’s focus on norm-takers highlights the reflexive nature of norm diffusion and that nature has implications for the EU itself as a norm exporter. Anyone with an interest in the research agenda on norm diffusion, normative power and the EU’s normative dialogue with the world will find this book highly valuable, including scholars, policy makers and students of subjects including political science, European studies, international relations and international and EU law.