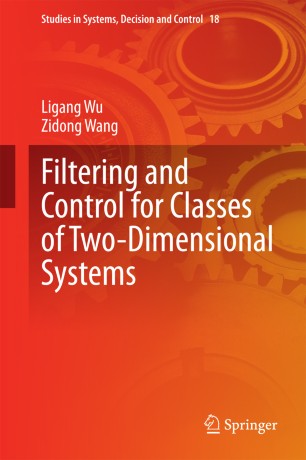 Filtering and Control for Classes of Two-Dimensional Systems

Part of the Studies in Systems, Decision and Control book series (SSDC, volume 18)

After an initial introduction of 2-D systems and the ideas of linear repetitive processes, the text is divided into two parts detailing:

·         general theory and methods of analysis and optimal synthesis for 2-D systems; and

·         application of the general theory to the particular case of differential/discrete linear repetitive processes.

The methods developed provide a framework for stability and performance analysis, optimal and robust controller and filter design and model approximation for the systems considered. Solutions to the design problems are couched in terms of linear matrix inequalities.

For readers interested in the state of the art in linear filtering, control and model reduction, Filtering and Control for Classes of Two-Dimensional Systems will be a useful reference for exploring the field of 2-D systems either from a purely theoretical research perspective or from the point of view of a multitude of potential applications including image processing, and the study of seismographic data or thermal processes.

Zidong Wang is currently Professor of Dynamical Systems and Computing at Brunel University, West London, United Kingdom. From January 1997 to December 1998, he was an Alexander von Humboldt research fellow with the Control Engineering Laboratory, Ruhr-University Bochum, Germany. From January 1999 to February 2001, he was a Lecturer with the Department of Mathematics, University of Kaiserslautern, Germany. From March 2001 to July 2002, he was a University Senior Research Fellow with the School of Mathematical and Information Sciences, Coventry University, U.K. In August 2002, he joined the Department of Information Systems and Computing, Brunel University, U.K., as a Lecturer, and was then promoted to a Reader in September 2003 and to a Chair Professor in July 2007. Professor Wang's research interests include dynamical systems, signal processing, bioinformatics, control theory and applications. He has published more than 200 papers in refereed international journals. His publications have received more than 5000 citations (excluding self-citations) with h-index 48. He was awarded the Humboldt research fellowship in 1996 from Alexander von Humboldt Foundation, the JSPS Research Fellowship in 1998 from Japan Society for the Promotion of Science, and the William Mong Visiting Research Fellowship in 2002 from the University of Hong Kong.