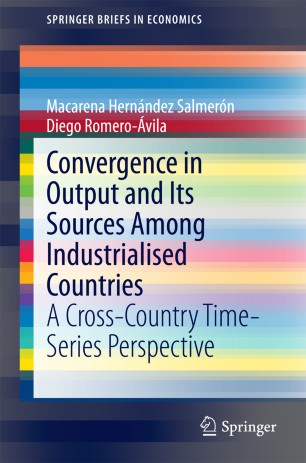 Convergence in Output and Its Sources Among Industrialised Countries

This book investigates the existence of stochastic and deterministic convergence of real output per worker and the sources of output (physical capital per worker, human capital per worker, total factor productivity –TFP– and average annual hours worked) in 21 OECD countries over the period 1970-2011. Towards this end, the authors apply a large battery of panel unit root and stationarity tests, all of which are robust to the presence of cross-sectional dependence. The evidence fails to provide clear-cut evidence of convergence dynamics either in real GDP per worker or in the series of the sources of output. Due to some limitations associated with second-generation panel unit root and stationarity tests, the authors further use the more flexible PANIC approach which provides evidence that real GDP per worker, real physical capital per worker, human capital and average annual hours exhibit some degree of deterministic convergence, whereas TFP series display a high degree of stochastic convergence.