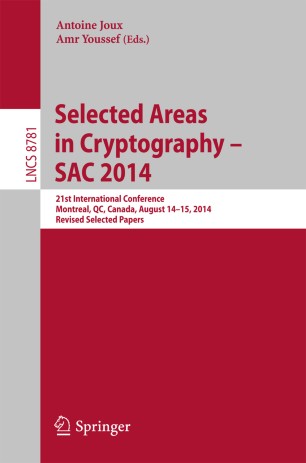 This book constitutes the proceedings of the 21st International Conference on Selected Areas in Cryptography, SAC 2014, held in Montreal, QC, Canada, in August 2014.
The 22 papers presented in this volume were carefully reviewed and selected from 103 submissions. There are four areas covered at each SAC conference. The three permanent areas are: design and analysis of symmetric key primitives and cryptosystems, including block and stream ciphers, hash function, MAC algorithms, cryptographic permutations, and authenticated encryption schemes; efficient implementations of symmetric and public key algorithms; mathematical and algorithmic aspects of applied cryptology. This year, the fourth area for SAC 2014 is: algorithms for cryptography, cryptanalysis and their complexity analysis.