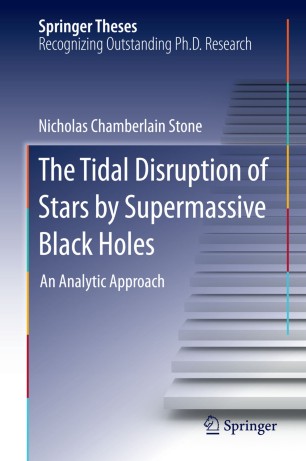 The Tidal Disruption of Stars by Supermassive Black Holes

This book provides a general introduction to the rapidly developing astrophysical frontier of stellar tidal disruption, but also details original thesis research on the subject. This work has shown that recoiling black holes can disrupt stars far outside a galactic nucleus, errors in the traditional literature have strongly overestimated the maximum luminosity of “deeply plunging” tidal disruptions, the precession of transient accretion disks can encode the spins of supermassive black holes, and much more. This work is based on but differs from the original thesis that was formally defended at Harvard, which received both the Roger Doxsey Award and the Chambliss Astronomy Achievement Student Award from the American Astronomical Society.

Dr. Nicholas Stone recently completed his PhD in Astronomy & Astrophysics at Harvard University under supervisor Professor Avi Loeb, graduating in May of 2013. Prior to his doctoral work, he obtained his Bachelor’s degree from Cornell University in Physics, Mathematics, and Economics. During completion of his thesis work on “Tidal Disruption of Stars by Supermassive Black Holes,” Nicholas received both the Roger Doxsey Award and the Chambliss Astronomy Achievement Student Award from the American Astronomical Society. He was also awarded a Harvard University Certificate of Distinction in Teaching for his work as a teaching fellow. He has accepted a position as a postdoctoral researcher working with Professor Brian Metzger at Columbia University, where he will spend the next three years continuing to study high-energy and relativistic astrophysical phenomena.