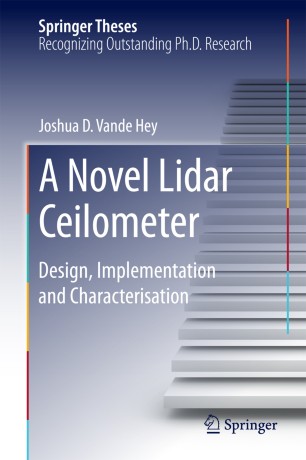 In this thesis, a new lidar (light detection and ranging) ceilometer capable of monitoring cloud base and sensitive to boundary layer aerosols is introduced. The key to this novelty lies in its divided-lens design that addresses a classical lidar problem of balancing transmitter-receiver overlap and signal-to-noise ratio, along with a method for characterizing overlap in the laboratory. Enhanced sensitivity in the near-range of the instrument is achieved without compromising signal-to-noise in a design that is straightforward to manufacture for broad deployment. The instrument, its optical characterization, and its performance in the field are described. The prototype instrument described here has since formed the basis of a commercial sensor for monitoring clouds and aerosols.
High-resolution, continuous observations of clouds and aerosols are needed to reduce the large uncertainties in our current understanding of their influence on climate that have been highlighted by the International Panel on Climate Change. And as international health organizations indicate growing public health threats over the coming decades resulting from poor air quality, extensive aerosol monitoring is required to assess personal exposure to and the health impacts of anthropogenic particulates. Ground-based optical remote sensing measurements made by well-characterized instruments, such as that described in these pages, are critical to this.

Joshua Vande Hey completed a B.A. in physics at Lawrence University in Appleton, Wisconsin, USA, in 2001. He then worked as an engineer at Alfalight, Inc., developing optical systems for characterising semiconductor lasers. After relocating to the UK in 2006, he led the development of the optical design and retrieval algorithms for an atmospheric lidar sensor in a collaboration between Loughborough University and Campbell Scientific, Ltd., and in 2013 he completed a PhD in optical engineering at Loughborough University. He is now a Natural Environment Research Council Knowledge Exchange Fellow in aerosols and health, based at the University of Leicester.