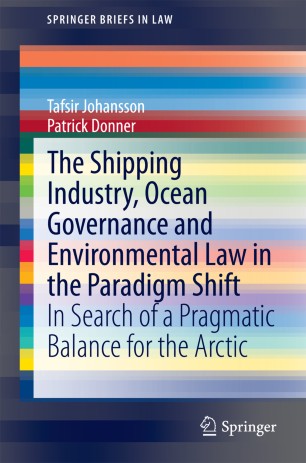 The Shipping Industry, Ocean Governance and Environmental Law in the Paradigm Shift

In Search of a Pragmatic Balance for the Arctic

This book examines the corpus of status quo environmental legal regime, geographical issues and redundant “stakeholder claims,” which persist in the Arctic. It examines multifarious theories relating not only to conflicting and opposing interests, but also to parties to whom the shipping industry should be accountable. The unique aspect of this book is the Corporate Social responsibility analysis pertaining to the Arctic and alternatives that strike a balance between the increased commercialization of the shipping industry and the laws and concepts of ocean governance. The book relevantly puts forward the concept of “ocean governance” and to what extent it can be addressed in terms of the Arctic. What distinguishes this book from others is the fact that it is not limited to examining the effects of climate change and how it is reshaping the way scholars assume the Arctic will be in the near future. Rather it creates a transparent nexus between opposing claims and increasing commercial interests and proceeds to scrutinize the efforts of the Arctic Council and individual Arctic coastal states. In this context, the book follows a given equation based on initial theories and how the opposing claims and increasing commercialization side of the equation can be balanced with the appropriate legal norm. It also reflects on the critical aspects of “hard law and soft law” which are two opposite ends of the legal pole and core elements of any legal spectrum. The book, after reflecting on those two elements, finally proposes a new Arctic legal regime, which is intricate and detailed and is basically a hierarchy based on logic and reasoning. In doing so, it imports a pristine theory for a pristine territory.