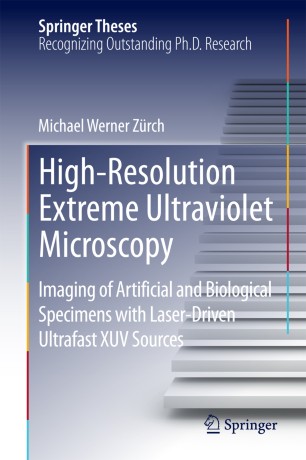 This book provides a comprehensive overview of the technique of frequency conversion of ultrafast lasers towards the extreme ultraviolet (XUV) regime, starting with the frequency conversion scheme and its technical implementation as well as general considerations of diffraction-based imaging at nanoscopic spatial resolutions. The last few centuries have seen continual advances in optical microscopy, driven by the demand to image ever-smaller objects. In recent years, frequency conversion of ultrafast lasers towards the extreme ultraviolet (XUV) regime has significantly enhanced the achievable resolution thanks to shorter wavelengths. The absence of high-magnification optics in the XUV regime is a major issue associated with this technique and is tackled with direct measurement and reconstruction of coherent diffraction patterns. The experimental application of this technique in terms of digital in-line holography and coherent-diffraction imaging is demonstrated on artificial and biological specimens. The book introduces a novel, award-winning cancer-cell classification scheme based on biological imaging. Finally, it presents a newly developed technique for generating structured illumination in the XUV regime and demonstrates its usability for super-resolution imaging.

Michael Zürch finished his diploma thesis in 2010 on optical induced damage in nanostructures at the Friedrich-Schiller-University Jena earning him the best diploma thesis award of the faculty. During his doctorate he contributed to eight peer-reviewed journal articles, first-authoring five of them. Furthermore, he contributed to two patents and more than a dozen conference presentations, winning an award at the SPIE Medical Imaging 2014 conference for his cancer cell classification research. He finished his PhD thesis in 2014 at the Institute of Optics and Quantum Electronics at FSU Jena on the generation of coherent laser-like extreme ultraviolet light and its application to high-resolution imaging.