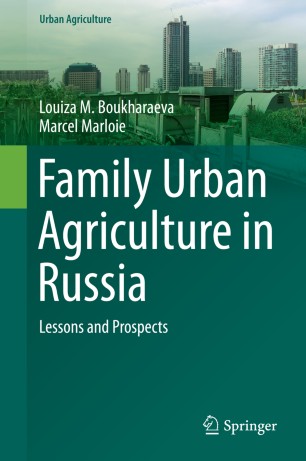 A significant phenomenon that affects nearly two-thirds of Russian city-dwellers, family urban agriculture – with its allotment gardens, allotment vegetable gardens, and dacha allotments – grew out of a unique history and cultural representations. The contemporary Urban Grower in Russia holds a legacy of the famines and traumatisms of the Second World War, which prompted Soviet authorities to encourage the development of allotments and gardening education, which they had previously opposed. The school system gave Urban Growers a literary education that connects working the soils and working plants with beauty, the good life, and culture. Urban Growers have won the right to build a small house on their garden plots to make a place for holidays that enlarge their living space.  The allotment gardens of Russia are the most developed sign of a rhizome that extends over the neighbouring countries of Asia and a large portion of Europe. Its history and current forms are different from the allotments of Western Europe. But some similarities are identifiable. The similarities observed suggest a possible common future, insofar as the Russian experience conveys universal teachings. It opens the way for thinking of an alternative to the single-family house that is accused of polluting and destroying the soil. It shows the possibility of reorganising the use of urban and periurban soils to increase the resilience to crises in terms of food security and resistance to emotional and psychological stress. It questions the representations of the international community on integral human habitat by showing how people need immediate, direct, and active contact with nature.  This experience offers many useful references for resolving common problems of the major cities in the world: food security, poverty, violence, environmental issues, and housing crises. Interrupted for almost a century, a new international scientific dialogue including the Urban Grower of Russia can become established on these subjects, which are decisive for the future of a definitively urban world.