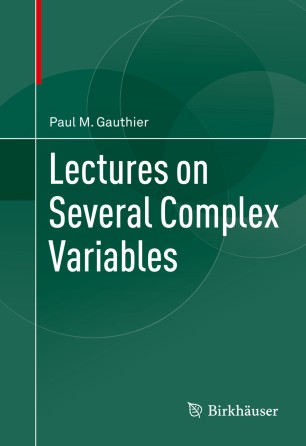 This monograph provides a concise, accessible snapshot of key topics in several complex variables, including the Cauchy Integral Formula, sequences of holomorphic functions, plurisubharmonic functions, the Dirichlet problem, and meromorphic functions.  Based on a course given at Université de Montréal, this brief introduction covers areas of contemporary importance that are not mentioned in most treatments of the subject, such as modular forms, which are essential for Wiles' theorem and the unification of quantum theory and general relativity.   Also covered is the Riemann manifold of a function, which generalizes the Riemann surface of a function of a single complex variable and is a topic that is well-known in one complex variable, but rarely treated in several variables.  Many details, which are intentionally left out, as well as many theorems are stated as problems, providing students with carefully structured instructive exercises.

Prerequisites for use of this book are functions of one complex variable, functions of several real variables, and topology, all at the undergraduate level.  Lectures on Several Complex Variables will be of interest to advanced undergraduate and beginning undergraduate students, as well as mathematical researchers and professors.