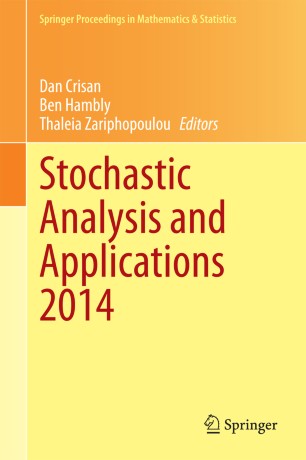 In Honour of Terry Lyons

Articles from many of the main contributors to recent progress in stochastic analysis are included in this volume, which provides a snapshot of the current state of the area and its ongoing developments. It constitutes the proceedings of the conference on "Stochastic Analysis and Applications" held at the University of Oxford and the Oxford-Man Institute during 23-27 September, 2013. The conference honored the 60th birthday of Professor Terry Lyons FLSW FRSE FRS, Wallis Professor of Mathematics, University of Oxford. Terry Lyons is one of the leaders in the field of stochastic analysis. His introduction of the notion of rough paths has revolutionized the field, both in theory and in practice.

Stochastic Analysis is the branch of mathematics that deals with the analysis of dynamical systems affected by noise. It emerged as a core area of mathematics in the late 20th century and has subsequently developed into an important theory with a wide range of powerful and novel tools, and with impressive applications within and beyond mathematics. Many systems are profoundly affected by stochastic fluctuations and it is not surprising that the array of applications of Stochastic Analysis is vast and touches on many aspects of life.

The present volume is intended for researchers and Ph.D. students in stochastic analysis and its applications, stochastic optimization and financial mathematics, as well as financial engineers and quantitative analysts.