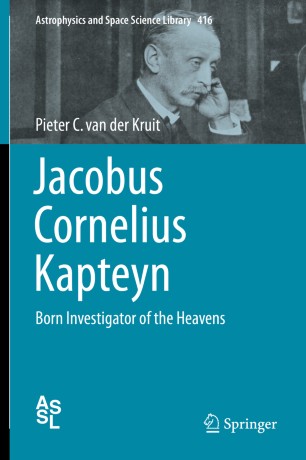 Born Investigator of the Heavens

Jacobus C. Kapteyn (1851-1922) was a Dutch astronomer who contributed heavily to major catalogs of star positions, such as the Cape Photographic Durchmusterung and the Harvard-Groningen Durchmusterung, and arranged extensive international collaboration through his Plan of Selected Areas. He contributed to the establishment of statistical astronomy and structure and dynamics of the Sidereal System. All aspects of Kapteyn’s life are discussed, from his birth in Barneveld, the Netherlands, to his death in Amsterdam, and his entire resume of scientific achievements in between. Kapteyn had some conflicts with others in his field, especially after the world became divided on how to handle scientific contributions from Germany post-World War I. Kapteyn's struggles and achievements are written against the backdrop of both the historical context of the world at that time as well as the scientific one.