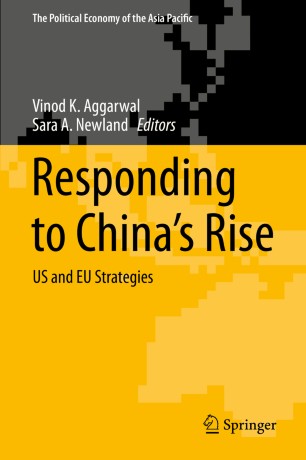 US and EU Strategies

Part of the The Political Economy of the Asia Pacific book series (PEAP, volume 15)

​In this edited volume, a set of issue and country experts tackle questions regarding China’s current rise to power within the current international economic and political order. The current international system is governed by a “Western” conception of order and based on the primacy of post–World War II rules, drawn from liberal models of capitalism and democracy practiced in the US and in Western Europe. In this context, the most important and most uncertain questions facing the West over the next decade concern how the EU and the US will respond to China’s rapid growth. Will the transatlantic relationship hold and become stronger, faced with this new economic and geopolitical challenge? Or will the US and the EU—an increasingly prominent global player—compete for economic and political advantage? After a brief introduction laying out the circumstances of China’s economic and political rise and the challenges that this poses to the existing international order, the book proceeds in three sections. The first section provides competing theoretical perspectives on China’s rise in a historical context. The second section provides a distinctly Chinese perspective on China’s current rise. The third section looks at responses from the United States and the European Union, focusing on both economic and security issues as well as the implications of China’s rise for US-EU relations. This book is relevant to both scholars and policymakers concerned with Chinese domestic politics and foreign policy, US foreign policy, EU foreign policy, China-US relations, China-EU relations, international security, international political economy, and emerging markets.