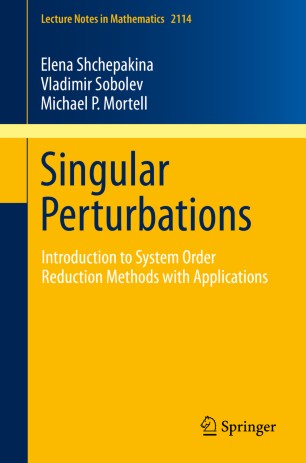 These lecture notes provide a fresh approach to investigating singularly perturbed systems using asymptotic and geometrical techniques. It gives many examples and step-by-step techniques, which will help beginners move to a more advanced level.

Singularly perturbed systems appear naturally in the modelling of many processes that are characterized by slow and fast motions simultaneously, for example, in fluid dynamics and nonlinear mechanics. This book’s approach consists in separating out the slow motions of the system under investigation. The result is a reduced differential system of lesser order. However, it inherits the essential elements of the qualitative behaviour of the original system.

Singular Perturbations differs from other literature on the subject due to its methods and wide range of applications. It is a valuable reference for specialists in the areas of applied mathematics, engineering, physics, biology, as well as advanced undergraduates for the earlier parts of the book, and graduate students for the later chapters.

Elena Shchepakina graduated with DSci in Applied Mathematics from the Zhukovskii Airforce Engineering Academy, Moscow, Russia in 2004 (PhD in Mathematics in 1995). She is the author of 3 books and a number of papers devoted to problems of Differential Equations and Dynamical Systems, Singular Perturbations, Geometrical Methods and Integral Manifolds Theory, Slow/Fast Models in Laser and Reacting Systems, Mathematics of Combustion, Biochemistry and Chemical Kinetics, Theories of Coherence and Polarization of Light, and Light Interaction with Natural Media. She was Professor at the Samara State University, Researcher at the Dept of Physics of University of Miami, and she is now Professor at the Department of Technical Cybernetics, Samara State Aerospace University.

Vladimir Sobolev graduated with PhD in Mathematics from the Institute of Mathematics, Ukrainian Academy of Science, Kiev in 1980, and with DSci in Applied Mathematics from Institute of System Studies Russian Academy of Sciences, Moscow, Russia, 1991. He is Professor at the Department of Technical Cybernetics, Samara State Aerospace University, and also he is Professor  and Chair at the Samara State University. His main scientific interests are in the following areas: Decomposition method for singularly perturbed systems; Investigations on control systems with singular perturbations; Theory of slow integral manifolds and complex dynamics of slow/fast systems; Investigations on slow/fast chemical kinetics a

Michael P. Mortell graduated with a PhD in Applied Mathematics from the California Institute of Technology in 1968. He has published extensively in the general area of nonlinear waves with special reference to bounded media. He was President of University College Cork for 10 years before taking up a personal Chair in Applied Mathematics, and he is now retired.

“Biochemical or physical models’ dimensions can often be reduced by taking into account the order of magnitude of the processes they describe. This book gives many examples of such a reduction being performed by applying the mathematical theory of singular perturbations. … this book is an excellent introduction to classical singular perturbations, enriched by some new authors’ ideas inspired by control theory … .” (Eric Benoît, Mathematical Reviews, June, 2015)