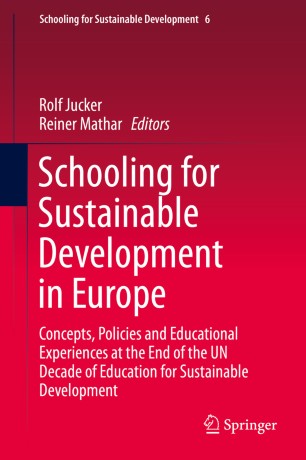 Schooling for Sustainable Development in Europe

Concepts, Policies and Educational Experiences at the End of the UN Decade of Education for Sustainable Development

This book examines the implementation of Education for Sustainable Development (ESD) programs in schools across Europe. It describes and analyzes how individual countries and the region as a whole have established teaching and learning methods to help students develop the competencies needed to be part of a sustainable society.

Featuring chapters written by experts throughout Europe, the book first provides a general overview of ESD in various contexts, including the state-of-the-art of ESD theory and conceptual development; political and social analysis; the various concepts of ESD competencies; and teacher training. Next, the book details how ESD has been implemented in different European countries and regions, including: Sweden, Italy, Germany, Austria, Switzerland, Catalonia, Hungary, Finland, Norway, Denmark, Flanders, France, Cyprus, UK, and the Netherlands.

In recognition of education as a motor of change, the United Nations General Assembly declared a Decade of Education for Sustainable Development (2005-2014), calling for the integration of sustainable development into all aspects of education and learning. Inside this book, readers will find details on what has been done, as well as assessments of what more could be done, across Europe. It will help readers gain valuable insights into how to help students develop the knowledge, skills, and values needed to shape a sustainable future.

Rolf Jucker is currently teamleader at Kaospilots Switzerland and a coach and consultant in organisational learning processes towards sustainability. Until the end of 2013 he ran the department of conceptual ESD development at the Swiss Foundation for ESD, éducation21. From 2008–2012 he was director of the Swiss Foundation for Environmental Education, an independent body tasked with the mainstreaming of Environmental Education and ESD in the Swiss school system. Having gained an MSc in Education for Sustainability, he has worked extensively as an international ESD advisor and has widely published on the subject, amongst others Our Common Illiteracy. Education as if the Earth and People mattered (2002).

Reiner Mathar is currently heading the coordination of ESD in the state of Hessen (Germany), is German representative of the KMK (Standing Conference of Ministers of Education in Germany) at the Steering Committee of UNECE (United Nations Economic Commission for Europe) and Member of the National Round Table for the UN-Decade on ESD in Germany. Since 1997 he has been involved in all nation-wide programmes on ESD in Germany, in particular in the process of developing the concept of "Gestaltungskompetenz", which is the leading concept of ESD in Germany. In the field of ESD with a focus on global development, he is one of the editors of the national curriculum framework. In 2010 he was co-opted as an expert on ESD onto the international ESD-EXPERT-net (India, Germany, Mexico and South-Africa).