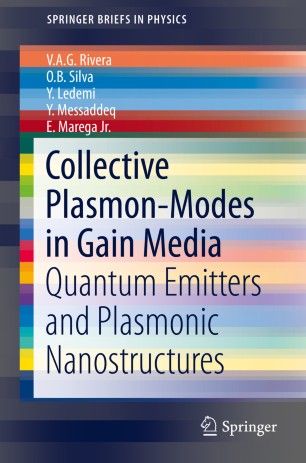 This book represents the first detailed description, including both theoretical aspects and experimental methods, of the interaction of rare-earth ions with surface plasmon polariton from the point of view of collective plasmon-photon interactions via resonance modes (metal nanoparticles or nanostructure arrays) with quantum emitters (rare-earth ions). These interactions are of particular interest for applications to optical telecommunications, optical displays, and laser solid state technologies. Thus, our main goal is to give a more precise overview of the rapidly emerging field of nanophotonics by means of the study of the quantum properties of light interaction with matter at the nanoscale. In this way, collective plasmon-modes in a gain medium result from the interaction/coupling between a quantum emitter (created by rare-earth ions) with a metallic surface, inducing different effects such as the polarization of the metal electrons (so-called surface plasmon polariton - SPP), a field enhancement sustained by resonance coupling, or transfer of energy due to non-resonant coupling between the metallic nanostructure and the optically active surrounding medium. These effects counteract the absorption losses in the metal to enhance luminescence properties or even to control the polarization and phase of quantum emitters. The engineering of plasmons/SPP in gain media constitutes a new field in nanophotonics science with a tremendous technological potential in integrated optics/photonics at the nanoscale based on the control of quantum effects. This book will be an essential tool for scientists, engineers, and graduate and undergraduate students interested not only in a new frontier of fundamental physics, but also in the realization of nanophotonic devices for optical telecommunication.