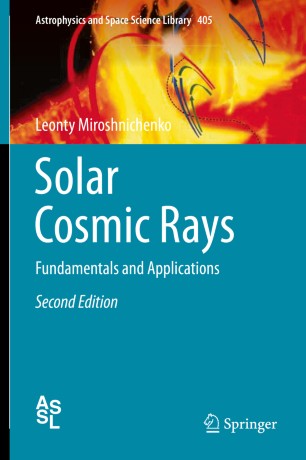 The book summarizes the results of solar cosmic ray (SCR) investigations since 1942. The present monograph, unlike the reviews published earlier, treats the problem in self-contained form, in all its associations—from fundamental astrophysical aspects to geophysical, aeronautical and cosmonautical applications.

It includes a large amount of new data, accumulated during the last several decades of space research. As a result of the "information burst" in space physics, there are a lot of new interesting theoretical concepts, models and ideas that deserve attention.

The author gives an extensive bibliography, which covers non-partially the main achievements and failures in this field. The book will be helpful for a wide audience of space physicists and it will be relevant to graduate and postgraduate courses.

The book will serve as a reference work for researchers and students in solar physics and astrophysical plasma physics, as well as in cosmic rays physics, astroparticle physics, space science, solar-terrestrial relations, geophysics and those researching space weather problems, especially the problems of radiation hazard in space.

Prof. Leonty Miroshnichenko obtained his PhD in Physics and Mathematics in 1991 and is currently a professor at IZMIRAN, in the Sector of Helio-Ecological Relations. His research interests include solar cosmic rays, radiation hazards in space, solar flares, solar gamma radiation, interplanetary dynamical processes, diagnostics and forecasts of solar proton events and solar-terrestrial relations. He has written approximately 250 publications, including 11 books on solar cosmic rays and solar-terrestrial relations.