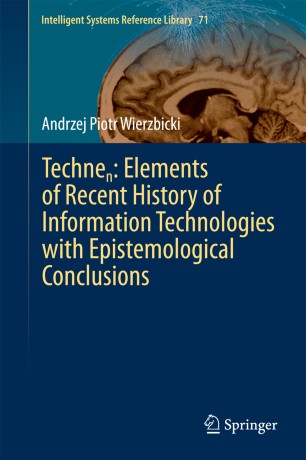 The book expresses the conviction that the art of creating tools – Greek techne – changes its character together with the change of civilization epochs and co-determines such changes. This does not mean that tools typical for a civilization epoch determine it completely, but they change our way of perceiving and interpreting the world. There might have been many such epochs in the history of human civilization (much more than the three waves of agricultural, industrial and information civilization). This is expressed by the title Technen of the book, where n denotes a subsequent civilization epoch.

During last fifty years we observed a decomposition of the old episteme (understood as a way of creating and interpreting knowledge characteristic for a given civilization epoch) of modernism, which was an episteme typical for industrial civilization. Today, the world is differently understood by the representatives of three different cultural spheres: of strict and natural sciences; of human and social sciences (especially by their part inclined towards postmodernism) and technical sciences that have a different episteme than even that of strict and natural sciences. Thus, we observe today not two cultures, but three different episteme.

The book consists of four parts. First contains basic epistemological observations, second is devoted to selected elements of recent history of information technologies, third contains more detailed epistemological and general discussions, fourth specifies conclusions. The book is written from the cognitive perspective of technical sciences, with a full awareness – and discussion – of its differences from the cognitive perspective of strict sciences or human and social sciences. The main thesis of the book is that informational revolution will probably lead to a formation of a new episteme.

The book includes discussions of many issues related to such general perspective, such as what is technology proper; what is intuition from a perspective of technology and of evolutionary naturalism; what are the reasons for and how large are the delays between a fundamental invention and its broad social utilization; what is the fundamental logical error (using paradoxes that are not real, only apparent) of the tradition of sceptical philosophy; what are rational foundations and examples of emergence of order out of chaos; whether civilization development based on two positive feedbacks between science, technology and the market might lead inevitably to a self-destruction of human civilization; etc.