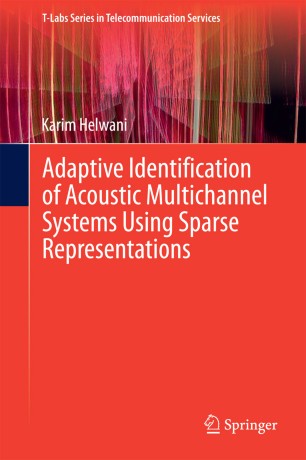 This book treats the topic of extending the adaptive filtering theory in the context of massive multichannel systems by taking into account a priori knowledge of the underlying system or signal. The starting point is exploiting the sparseness in acoustic multichannel system in order to solve the non-uniqueness problem with an efficient algorithm for adaptive filtering that does not require any modification of the loudspeaker signals.
The book discusses in detail the derivation of general sparse representations of acoustic MIMO systems in signal or system dependent transform domains. Efficient adaptive filtering algorithms in the transform domains are presented and the relation between the signal- and the system-based sparse representations is emphasized. Furthermore, the book presents a novel approach to spatially preprocess the loudspeaker signals in a full-duplex communication system. The idea of the preprocessing is to prevent the echoes from being captured by the microphone array in order to support the AEC system. The preprocessing stage is given as an exemplarily application of a novel unified framework for the synthesis of sound figures. Finally, a multichannel system for the acoustic echo suppression is presented that can be used as a postprocessing stage for removing residual echoes. As first of its kind, it extracts the near-end signal from the microphone signal with a distortionless constraint and without requiring a double-talk detector.