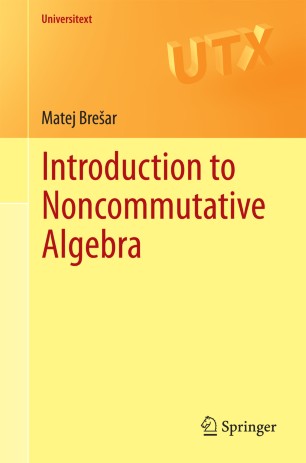 Providing an elementary introduction to noncommutative rings and algebras, this textbook begins with the classical theory of finite dimensional algebras. Only after this, modules, vector spaces over division rings, and tensor products are introduced and studied. This is followed by Jacobson's structure theory of rings. The final chapters treat free algebras, polynomial identities, and rings of quotients.

Many of the results are not presented in their full generality. Rather, the emphasis is on clarity of exposition and simplicity of the proofs, with several being different from those in other texts on the subject. Prerequisites are kept to a minimum, and new concepts are introduced gradually and are carefully motivated. Introduction to Noncommutative Algebra is therefore accessible to a wide mathematical audience. It is, however, primarily intended for beginning graduate and advanced undergraduate students encountering noncommutative algebra for the first time.