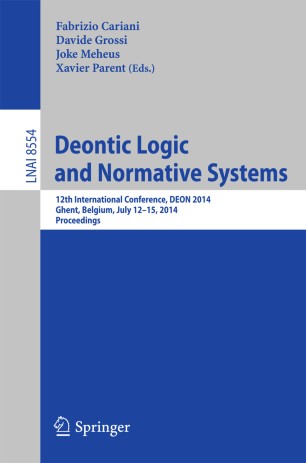 This volume presents the refereed proceedings of the 12th International Conference on Deontic Logic and Normative Systems, DEON 2014, held in Ghent, Belgium, in July 2014. The 17 revised papers and the 2 invited papers included in this volume were carefully reviewed and selected from 31 submissions. Topics covered include challenges from natural language for deontic logic; the relationship between deontic and other types of modality: epistemic modality, imperatives, supererogatory, etc.; the deontic paradoxes; the modeling of normative concepts other than obligation and permission, e.g., values; the game-theoretical aspects of deontic reasoning; the emergence of norms; norms from a conversational and pragmatic point of view; and norms and argumentation.