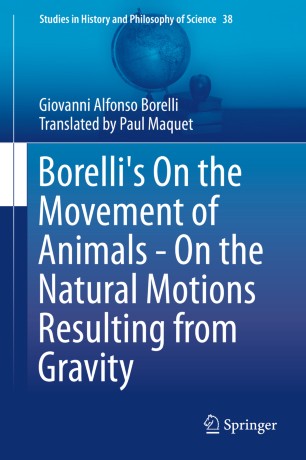 Part of the Studies in History and Philosophy of Science book series (AUST, volume 38)

This volume provides an introduction to Borelli’s theory on the movement of animals and describes his theory and scientific experiments relating to the natural movements of bodies in a fluid environment. It describes in great detail why and how bodies which present with different magnitudes, weights and shapes move at a greater or a smaller velocity in certain proportion in the fluid environment.

This volume is the second of two volumes that contain the Introduction and physical-mathematical illustrations necessary to understand Giovanni Alfonso Borelli’s work On the Movement of Animals, the founding text of seventeenth century biomechanics. The first volume, entitled On the Force of Percussion, demonstrates the nature of the energy of percussion, its causes, properties and effects.

Attraction nor attractive force in nature Giovanni Alfonso Borelli Movements of heavy bodies Mutual binding of floating corpuscles Natural Motions Resulting From Gravity Natural velocity of heavy bodies Nature and cause of fluidity Positive lightness in the nature of things Small particles of water above the surface of the water Spontaneous elevation of small particles of water Structure, gravity, equilibrium and the elastic force of air Sublunary bodies in a fluid environment The necessity of vacuum Watery bodies frozen increase in volume with an enormous force