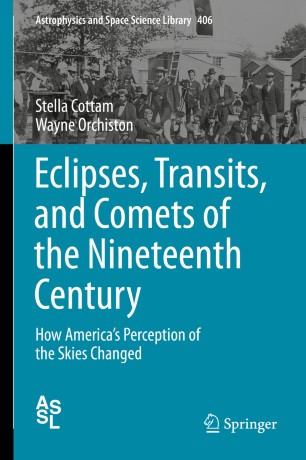 Eclipses, Transits, and Comets of the Nineteenth Century

How America's Perception of the Skies Changed

Grabbing the attention of poets, politicians and the general public alike, a series of spectacular astronomical events in the late 1800s galvanized Americans to take a greater interest in astronomy than ever before. At a time when the sciences were not yet as well established in the United States as they were in Europe, this public interest and support provided the growing scientific community in the United States with the platform they needed to advance the field of astronomy in the United States.

Earlier in the 19th century comets, meteors and the discovery of the planet Neptune were all sources of inspiration to the general public. The specific events to be considered here are the total solar eclipses of 1868, 1869 and 1878 and the transits of Venus of 1874 and 1882. The available media responded to public interest as well as generating more interest. These events laid the groundwork that led to today's thriving network of American amateur astronomers, and provide a fascinating look at earlier conceptions of the stars.