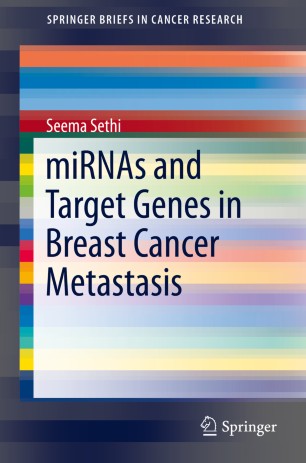 Part of the SpringerBriefs in Cancer Research book series (BRIEFSCANCER)

This SpringerBrief gives the latest research on the role of miRNAs in breast cancer metastasis. MicroRNAs (miRNAs) are recently described small endogenous noncoding RNAs implicated in the posttranscriptional control of gene expression. These tiny molecules are involved in developmental, physiologic phenomenon as well as pathologic processes including cancers. In fact, miRNAs have emerged as critical regulators of cancer progression, invasion and metastasis. This is mainly because a single miRNA can affect several downstream genes and signaling pathways with oncogenic or tumor suppressor actions depending on the target genes affected. Due to this multimodal downstream signaling effects, these small endogenous molecules hold great promise in metastasis prevention and treatment. Modulating the activity of miRNAs can provide opportunities for novel cancer interventions. Targeting miRNAs could become a novel prognostic and therapeutic strategy to prevent the future development of metastasis. Thus, miRNAs could also serve as a potential targets for anti-metastatic therapy.   The book explores how the expression of miRNAs in the primary tumor could be silenced using antagomirs (chemically modified anti-miRNA oligonucleotides), which could prevent the development of metastasis; whereas once metastasis develops then it could be treated with miRNA mimics for inducing its expression for the treatment. Therefore, development of miRNA-based prophylactic therapies could serve as precision and personalized medicine against future development of metastasis of breast and other cancers.