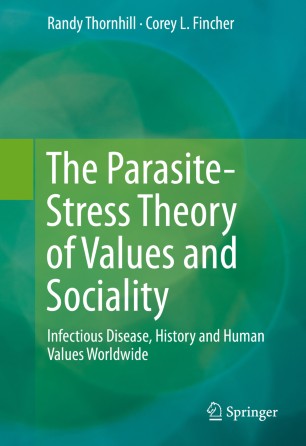 The Parasite-Stress Theory of Values and Sociality

Why do some people pray more than others? Why do some people prefer to be with healthier-looking people? Why are some people more conservative than others? Why does the prevalence of violence vary across the world? Why are some countries poor while others are increasingly wealthy? Why are some countries mired in corruption? Randy Thornhill and Corey L. Fincher argue that the answers to these questions, and many more about the human condition, come down to understanding how infectious diseases have shaped human behavior and psychology. Paramount to this view is that other human beings are often the harbinger of infectious diseases, which has profound implications for the evolution of human sociality. In The Parasite-Stress Theory of Values and Sociality: Infectious Disease, History and Human Values Worldwide, the authors bring a wealth of evidence from across many scholarly fields, much of which has been produced in the last decade, to support this claim. Read this book to learn how infectious diseases have shaped human emotions, morality, political and cultural values, personality, family ties, mate preferences and sexuality, religiosity, intergroup psychology, governmental systems, trade, war, economic development, intelligence and innovation, and biodiversity, and more.

Randy Thornhill is Distinguished Professor of Biology at The University of New Mexico. Dr. Thornhill's 150+ published papers and four books on the evolutionary and ecological aspects of sociality and behavior have been cited over 17,000 times. He served as President of the Human Behavior and Evolution Society from 2011 through 2013. Corey L. Fincher is an Assistant Professor in the University of Warwick, U.K.'s Department of Psychology. The parasite-stress model emerged as a result of his and Thornhill's research, and the two researchers' publications since 2005 established this theory of sociality.

“The book might appeal to academics looking for an introduction to this research program, for example, psychologists, anthropologists, sociologists, or political scientists concerned with cultural differences and seeking an alternative perspective. … The volume has much to offer for fans of consilience. … The book also has much to offer for those skeptical of parasite stress having such encompassing effects on culture as well as for those skeptical of the psychological processes claimed to cause the cultural variation.” (Florian van Leeuwen, The Quarterly Review of Biology, Vol. 91 (2), June, 2016)