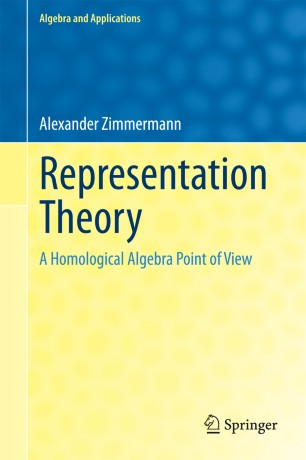 A Homological Algebra Point of View

Part of the Algebra and Applications book series (AA, volume 19)

It further discusses vertices, defect groups, Green and Brauer correspondences and Clifford theory. Whenever possible the statements are presented in a general setting for more general algebras, such as symmetric finite dimensional algebras over a field.

Then, abelian and derived categories are introduced in detail and are used to explain stable module categories, as well as derived categories and their main invariants and links between them. Group theoretical applications of these theories are given – such as the structure of blocks of cyclic defect groups – whenever appropriate. Overall, many methods from the representation theory of algebras are introduced.

Representation Theory assumes only the most basic knowledge of linear algebra, groups, rings and fields, and guides the reader in the use of categorical equivalences in the representation theory of groups and algebras. As the book is based on lectures, it will be accessible to any graduate student in algebra and can be used for self-study as well as for classroom use.