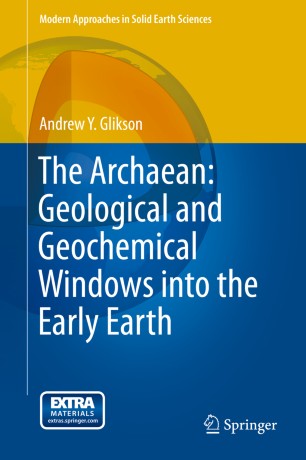 The Archaean: Geological and Geochemical Windows into the Early Earth

Determinations of the age of the Earth as 4.54 ± 0.05 billion years (Ga) leave large part of its earliest history unknown. Isotopic and geochemical signatures in rocks as old as ~4.0 Ga indicate an evolutionary trend from mafic-ultramafic crust to tonalite-trondhjemite-granodiorite (TTG)-dominated micro continental nuclei. To date signatures of the 3.95 – 3.85 Ga Late heavy Bombardment (LHB), manifested by the lunar Mare, have not been discovered on Earth. Recent discoveries of near to 14 Archaean impact ejecta units up to 3.48 Ga-old intercalated with volcanic and sedimentary rocks in the Barberton and Pilbara greenstone belts, including clusters about 3.25 – 3.22 Ga and 2.63 – 2.48 Ga in age, may represent terrestrial vestiges of an extended LHB. The interval of ~3.25 – 3.22 Ga-ago emerges as a major break in Archaean crustal evolution when major asteroid bombardment resulted in faulting, large scale uplift, intrusion of granites and an abrupt shift from crustal conditions dominated by mafic-ultramafic crust associated with emplacement of TTG plutons, to semi-continental nuclei represented by arenites, turbidites, conglomerate, banded iron formations and felsic volcanics. At this stage pre-3.2 Ga dome-structured granite-greenstone systems were largely replaced by linear accretional granite-greenstone systems such as the Superior Province in Canada, Yilgarn Craton and the western Pilbara Craton, compared by some authors to circum-Pacific arc-trench settings. A fundamental geotectonic transformation is consistent with the increasing role of garnet fractionation as indicated by Al-depleted and plagioclase-enriched magmatic compositions, suggesting cooler high P/T (pressure/temperature) mantle and crustal magma sources, consistent with development of subduction. A concentration of large impacts during 2.63 – 2.48 Ga potentially accounts for peak magmatic events culminating the Archaean era. However, strict comparisons between the Archaean systems and modern Arc-trench geotectonic setting will be shown to be unwarranted. The book provides an excursion through granite-greenstone terrains, and to a lesser extent high-grade metamorphic terrains, focusing on relic primary features including volcanic, sedimentary, petrological, geochemical and paleontological elements, with the aim of elucidating the nature of original environments and processes which dominated environments in which early life forms have emerged. By contrast to uniformitarian models, which take little or no account of repeated impacts of large asteroid clusters and their effects during ~3.47 – 2.48 Ga, the Archaean geological record is consistent with the theory of asteroid impact-triggered volcanic activity originally advanced by D.H. Green in 1972 and 1981.