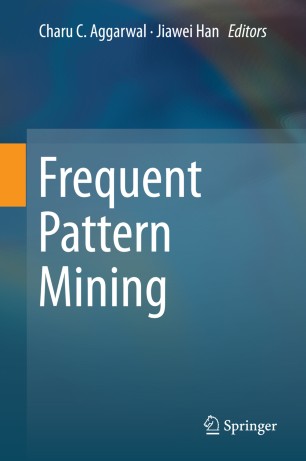 This comprehensive reference consists of 18 chapters from prominent researchers in the field. Each chapter is self-contained, and synthesizes one aspect of frequent pattern mining. An emphasis is placed on simplifying the content, so that students and practitioners can benefit from the book. Each chapter contains a survey describing key research on the topic, a case study and future directions. Key topics include: Pattern Growth Methods, Frequent Pattern Mining in Data Streams, Mining Graph Patterns, Big Data Frequent Pattern Mining, Algorithms for Data Clustering and more. Advanced-level students in computer science, researchers and practitioners from industry will find this book an invaluable reference.

Charu Aggarwal is a Research Scientist at the IBM T. J. Watson Research Center in Yorktown Heights, New York. He completed his B.S. from IIT Kanpur in 1993 and his Ph.D. from Massachusetts Institute of Technology in 1996. His research interest during his Ph.D. years was in combinatorial optimization (network flow algorithms), and his thesis advisor was Professor James B. Orlin. He has since worked in the field of data mining, with particular interests in data streams, privacy, uncertain data and social network analysis. He has published over 200 papers in refereed venues and has applied for or been granted over 80 patents. Because of the commercial value of the above-mentioned patents, he has received several invention achievement awards and has thrice been designated a Master Inventor at IBM. He is a recipient of an IBM Corporate Award (2003) for his work on bio-terrorist threat detection in data streams, a recipient of the IBM Outstanding Innovation Award (2008) for his scientific contributions to privacy technology and a recipient of an IBM Research Division Award (2008) for his scientific contributions to data stream research. He has served on the program committees of most major database/data mining conferences, and served as program vice-chairs of the SIAM Conference on Data Mining, 2007, the IEEE ICDM Conference, 2007, the WWW Conference 2009, and the IEEE ICDM Conference, 2009. He served as an associate editor of the IEEE Transactions on Knowledge and Data Engineering Journal from 2004 to 2008. He is an associate editor of the ACM TKDD Journal an action editor of the Data Mining and Knowledge Discovery Journal , editor-in-chief of ACM SIGKDD Explorations and an associate editor of the Knowledge and Information Systems Journal. He is a fellow of the ACM (2013) and the IEEE (2010) for "contributions to knowledge discovery and data mining techniques". Jiawei Han received his BS from University of Science and Technology of China in 1979 and his PhD from the University of Wisconsin in Computer Science in 1985.He was a professor in the School of Computing Science at Simon Fraser University. Currently he is a professor, at the Department of Computer Science in the University of Illinois at Urbana-Champaign. He is also the Director of Information Network Academic Research Center (INARC) supported by Network Science Collaborative Technology Alliance (NSCTA) program of U.S. Army Research Lab (ARL). Han has chaired or served on over 100 program committees of international conferences and workshops, including PC co-chair of 2005 (IEEE), International Conference on Data Mining (ICDM), Americas Coordinator of 2006 International Conference on Very Large Data Bases (VLDB). He also served as the founding Editor-In-Chief of ACM Transactions on Knowledge Discovery from Data. He is an ACM fellow and an IEEE Fellow. He received the 2004 ACM SIGKDD Innovations Award and the 2005 IEEE Computer Society Technical Achievement Award. The book: Han, Kamber and Pei, "Data Mining: Concepts and Techniques" (3rd ed., Morgan Kaufmann, 2011) has been popularly used as a textbook worldwide. He was the 2009 winner of the McDowell Award, the highest technical award made by IEEE. He teaches courses CS412 - Data Mining and CS512 - Advanced Data Mining at University of Illinois, Urbana Champaign. His course CS412 - Data Mining is highly popular among students and is over-subscribed in each offering.

“This multiauthor volume offers a thorough review of methods in frequent pattern mining. … This volume will be an essential reference for both researchers and practitioners in data mining.” (H. Van Dyke Parunak, Computing Reviews, March, 2016)