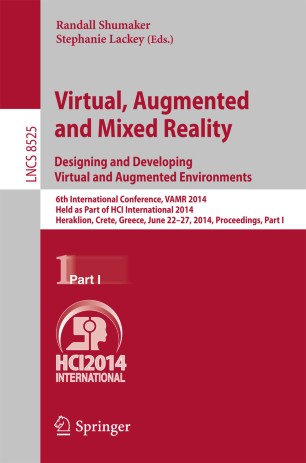 The two-volume set LNCS 8525-8526 constitutes the refereed proceedings of the 6th International Conference on Virtual, Augmented and Mixed Reality, VAMR 2014, held as part of the 16th International Conference on Human-Computer Interaction, HCI 2014, in Heraklion, Crete, Greece, in June 2014, jointly with 13 other thematically similar conferences. The total of 1476 papers and 220 posters presented at the HCII 2014 conferences were carefully reviewed and selected from 4766 submissions. These papers address the latest research and development efforts and highlight the human aspects of design and use of computing systems. The papers thoroughly cover the entire field of human-computer interaction, addressing major advances in knowledge and effective use of computers in a variety of application areas. The total of 82 contributions included in the VAMR proceedings were carefully reviewed and selected for inclusion in this two-volume set. The 39 papers included in this volume are organized in the following topical sections: interaction devices, displays and techniques in VAMR; designing virtual and augmented environments; avatars and virtual characters; developing virtual and augmented environments.