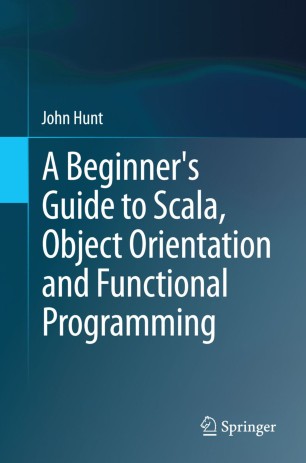 A Beginner's Guide to Scala, Object Orientation and Functional Programming

Scala is a new programming language developed by Martin Odersky and his team at the EPFL. The name Scala is derived from Sca(lable) La(nguage). Scala is a multi-paradigm language, incorporating object oriented approaches with functional programming.

Although some familiarity with standard computing concepts is assumed (such as the idea of compiling a program and executing this compiled form, etc.) and with basic procedural language concepts (such as variables and allocation of values to variables) the early chapters of the book do not assume any familiarity with object orientation nor functional programming. These chapters also step through other concepts with which the reader may not be familiar (such as list processing). From this background, John Hunt provides a practical introduction to object and functional technology using Scala, one of the newest and most interesting programming languages available.

A variety of concepts are introduced through practical experience taking the reader beyond the level of the language syntax to the philosophy and practice of object-oriented development and functional programming.

Students, and those actively involved in the software industry will find this comprehensive introduction to Scala, and to object orientation and functional programming, invaluable.

John Hunt is a technology trainer, consultant, mentor and author who has 30 years experience within the computing industry. He has worked extensively in Object Oriented technologies over the last 20 years, although his career began with writing LISP on a Symbolics Lisp Machine. He first encountered Scala in 2010 through an organization with which he was working. Since then he has been involved in several Scala projects and has worked with a number of teams on developing their Scala skills.

“It is a guide to a new programming language, Scala, that is written to serve the needs of advanced students or skilled software developers who wish to learn to use Scala to its fullest extent. … presents Scala in a stepwise manner in 43 well-focused and well-organized chapters. … The chapters contain numerous code examples, encouraging readers to play with the examples and learn by experiencing the language. … Summing Up: Recommended. Upper-division undergraduates through professionals/practitioners; two-year technical program students.” (J. Beidler, Choice, Vol. 52 (7), March, 2015)