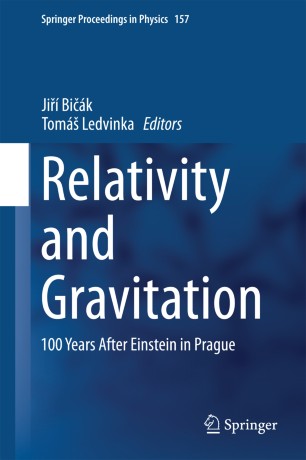 100 Years after Einstein in Prague

In early April 1911 Albert Einstein arrived in Prague to become full professor of theoretical physics at the German part of Charles University. It was there, for the first time, that he concentrated primarily on the problem of gravitation. Before he left Prague in July 1912 he had submitted the paper “Relativität und Gravitation: Erwiderung auf eine Bemerkung von M. Abraham” in which he remarkably anticipated what a future theory of gravity should look like.

At the occasion of the Einstein-in-Prague centenary an international meeting was organized under a title inspired by Einstein's last paper from the Prague period: "Relativity and Gravitation, 100 Years after Einstein in Prague". The main topics of the conference included: classical relativity, numerical relativity, relativistic astrophysics and cosmology, quantum gravity, experimental aspects of gravitation, and conceptual and historical issues.

The conference attracted over 200 scientists from 31 countries, among them a number of leading experts in the field of general relativity and its applications. This volume includes abstracts of the plenary talks and full texts of contributed talks and articles based on the posters presented at the conference. These describe primarily original results of the authors. Full texts of the plenary talks are included in the volume "General Relativity, Cosmology and Astrophysics--Perspectives 100 Years after Einstein in Prague", eds. J. Bičák and T. Ledvinka, published also by Springer Verlag.