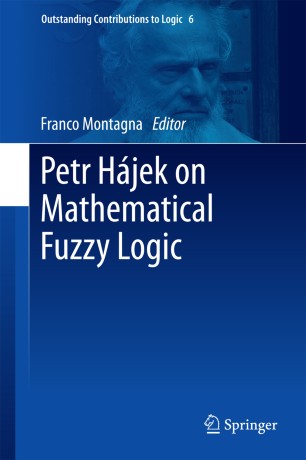 This volume celebrates the work of Petr Hájek on mathematical fuzzy logic and presents how his efforts have influenced prominent logicians who are continuing his work. The book opens with a discussion on Hájek's contribution to mathematical fuzzy logic and with a scientific biography of him, progresses to include two articles with a foundation flavour, that demonstrate some important aspects of Hájek's production, namely, a paper on the development of fuzzy sets and another paper on some fuzzy versions of set theory and arithmetic.

Articles in the volume also focus on the treatment of vagueness, building connections between Hájek's favorite fuzzy logic and linguistic models of vagueness. Other articles introduce alternative notions of consequence relation, namely, the preservation of truth degrees, which is discussed in a general context, and the differential semantics. For the latter, a surprising strong standard completeness theorem is proved. Another contribution also looks at two principles valid in classical logic and characterize the three main t-norm logics in terms of these principles.

Other articles, with an algebraic flavor, offer a summary of the applications of lattice ordered-groups to many-valued logic and to quantum logic, as well as an investigation of prelinearity in varieties of pointed lattice ordered algebras that satisfy a weak form of distributivity and have a very weak implication.

The last part of the volume contains an article on possibilistic modal logics defined over MTL chains, a topic that Hájek discussed in his celebrated work, Metamathematics of Fuzzy Logic, and another one where the authors, besides of offering unexpected premises such as proposing to call Hájek's basic fuzzy logic HL, instead of BL, propose a very weak system, called SL as a candidate for the role of the really basic fuzzy logic. The paper also provides a generalization of the prelinearity axiom, which was investigated by Hájek in the context of fuzzy logic.