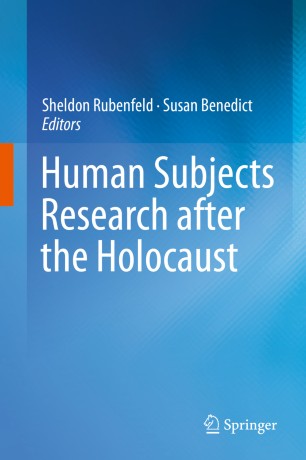 Human Subjects Research after the Holocaust

“An engaging, compelling and disturbing confrontation with evil …a book that will be transformative in its call for individual and collective moral responsibility." – Michael A. Grodin, M.D., Professor and Director, Project on Medicine and the Holocaust, Elie Wiesel Center for Judaic Studies, Boston University

Human Subjects Research after the Holocaust challenges you to confront the misguided medical ethics of the Third Reich personally, and to apply the lessons learned to contemporary human subjects research. While it is comforting to believe that Nazi physicians, nurses, and bioscientists were either incompetent, mad, or few in number, they were, in fact, the best in the world at the time, and the vast majority participated in the government program of “applied biology.” They were not coerced to behave as they did—they enthusiastically exploited widely accepted eugenic theories to design horrendous medical experiments, gas chambers and euthanasia programs, which ultimately led to mass murder in the concentration camps. Americans provided financial support for their research, modeled their medical education and research after the Germans, and continued to perform unethical human subjects research even after the Nuremberg Doctors’ Trial. The German Medical Association apologized in 2012 for the behavior of its physicians during the Third Reich. By examining the medical crimes of human subjects researchers during the Third Reich, you will naturally examine your own behavior and that of your colleagues, and perhaps ask yourself "If the best physicians and bioscientists of the early 20th century could do evil while believing they were doing good, can I be certain that I will never do the same?"

·         Compels introspection and self-examination by today's medical and research practitioners