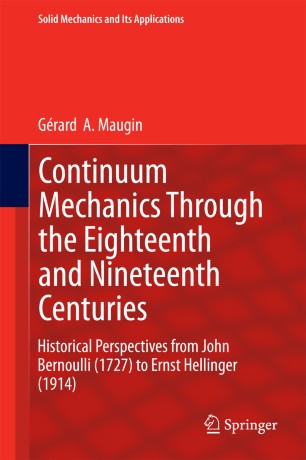 Continuum Mechanics Through the Eighteenth and Nineteenth Centuries

Part of the Solid Mechanics and Its Applications book series (SMIA, volume 214)

Conceived as a series of more or less autonomous essays, the present book critically exposes the initial developments of continuum thermo-mechanics in a post Newtonian period extending from the creative works of the Bernoullis to the First World war, i.e., roughly during first the “Age of reason” and next the “Birth of the modern world”. The emphasis is rightly placed on the original contributions from the “Continental” scientists (the Bernoulli family, Euler, d’Alembert, Lagrange, Cauchy, Piola, Duhamel, Neumann, Clebsch, Kirchhoff, Helmholtz, Saint-Venant, Boussinesq, the Cosserat brothers, Caratheodory) in competition with their British peers (Green, Kelvin, Stokes, Maxwell, Rayleigh, Love,..). It underlines the main breakthroughs as well as the secondary ones. It highlights the role of scientists who left essential prints in this history of scientific ideas. The book shows how the formidable developments that blossomed in the twentieth century (and perused in a previous book of the author in the same Springer Series: “Continuum Mechanics through the Twentieth Century”, Springer 2013) found rich compost in the constructive foundational achievements of the eighteenth and nineteenth centuries. The pre-WWI situation is well summarized by a thorough analysis of treatises (Appell, Hellinger) published at that time. English translations by the author of most critical texts in French or German are given to the benefit of the readers.