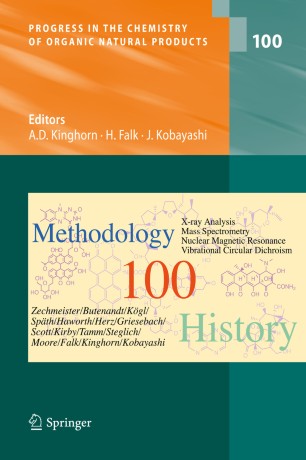 Progress in the Chemistry of Organic Natural Products 100

Part of the Progress in the Chemistry of Organic Natural Products book series (POGRCHEM, volume 100)

The volumes of this classic series, now referred to simply as "Zechmeister" after its founder, L. Zechmeister, have appeared under the Springer Imprint ever since the series' inauguration in 1938. It is therefore not really surprising to find out that the list of contributing authors, who were awarded a Nobel Prize, is quite long: Kurt Alder, Derek H.R. Barton, George Wells Beadle, Dorothy Crowfoot-Hodgkin, Otto Diels, Hans von Euler-Chelpin, Paul Karrer, Luis Federico Leloir, Linus Pauling, Vladimir Prelog, with Walter Norman Haworth and Adolf F.J. Butenandt serving as members of the editorial board.

The volumes contain contributions on various topics related to the origin, distribution, chemistry, synthesis, biochemistry, function or use of various classes of naturally occurring substances ranging from small molecules to biopolymers. Each contribution is written by a recognized authority in his field and provides a comprehensive and up-to-date review of the topic in question. Addressed to biologists, technologists and chemists alike, the series can be used by the expert as a source of information and literature citations and by the non-expert as a means of orientation in a rapidly developing discipline.