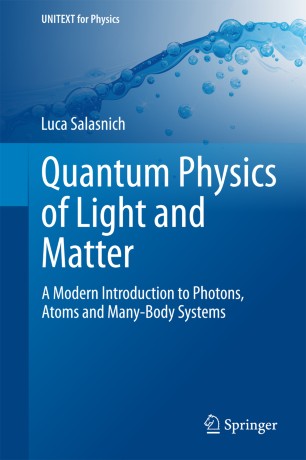 Quantum Physics of Light and Matter

A Modern Introduction to Photons, Atoms and Many-Body Systems

The book gives an introduction to the field quantization (second quantization) of light and matter with applications to atomic physics. The first chapter briefly reviews the origins of special relativity and quantum mechanics and the basic notions of quantum information theory and quantum statistical mechanics. The second chapter is devoted to the second quantization of the electromagnetic field, while the third chapter shows the consequences of the light field quantization in the description of electromagnetic transitions.In the fourth chapter it is analyzed the spin of the electron, and in particular its derivation from the Dirac equation, while the fifth chapter investigates the effects of external electric and magnetic fields on the atomic spectra (Stark and Zeeman effects). The sixth chapter describes the properties of systems composed by many interacting identical particles by introducing the Hartree-Fock variational method, the density functional theory, and the Born-Oppenheimer approximation. Finally, in the seventh chapter it is explained the second quantization of the non-relativistic matter field, i.e. the Schrödinger field, which gives a powerful tool for the investigation of many-body problems and also atomic quantum optics. At the end of each chapter there are several solved problems which can help the students to put into practice the things they learned.