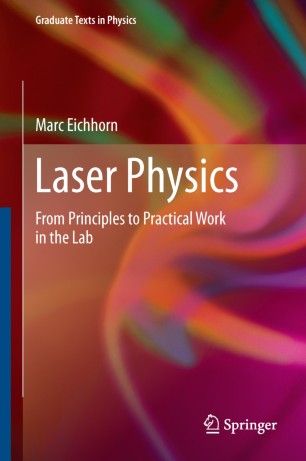 From Principles to Practical Work in the Lab

This textbook originates from a lecture course in laser physics at the Karlsruhe School of Optics and Photonics at the Karlsruhe Institute of Technology (KIT). A main goal in the conception of this textbook was to describe the fundamentals of lasers in a uniform and especially lab-oriented notation and formulation as well as many currently well-known laser types, becoming more and more important in the future. It closes a gap between the measureable spectroscopic quantities and the whole theoretical description and modeling. This textbook contains not only the fundamentals and the context of laser physics in a mathematical and methodical approach important for university-level studies. It allows simultaneously, owing to its conception and its modern notation, to directly implement and use the learned matter in the practical lab work. It is presented in a format suitable for everybody who wants not only to understand the fundamentals of lasers but also use modern lasers or even develop and make laser setups. This book tries to limit prerequisite knowledge and fundamental understanding to a minimum and is intended for students in physics, chemistry and mathematics after a bachelor degree, with the intention to create as much joy and interest as seen among the participants of the corresponding lectures.
This university textbook describes in its first three chapters the fundamentals of lasers: light-matter interaction, the amplifying laser medium and the laser resonator. In the fourth chapter, pulse generation and related techniques are presented. The fifth chapter gives a closing overview on different laser types gaining importance currently and in the future. It also contains a set of examples on which the theory learned in the first four chapters is applied and extended.