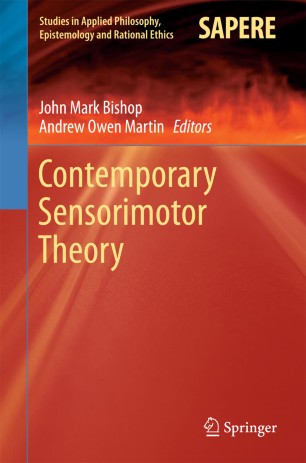 Why does a circle look curved and not angular? Why does red not sound like a bell? Why, as I interact with the world, is there something it is like to be me? An analytic philosopher might suggest: ``if we ponder the concept of circle we find that it is the essence of a circle to be round’’. However, where does this definition come from? Was it set in stone by the Gods, in other words by divine arbiters of circleness, redness and consciousness? Particularly, with regard to visual consciousness, a first attempt to explain why our conscious experience of the world appears as it does has been attributed to Kevin O’Regan and Alva Noe, who published their sensorimotor account of vision and visual consciousness in 2001.

Starting with a chapter by Kevin O’Regan, Contemporary Sensorimotor Theory continues by presenting fifteen additional essays on as many developments achieved in recent years in this field. It provides readers with a critical review of the sensorimotor theory and in so doing introduces them to a radically new enactive approach in cognitive science.