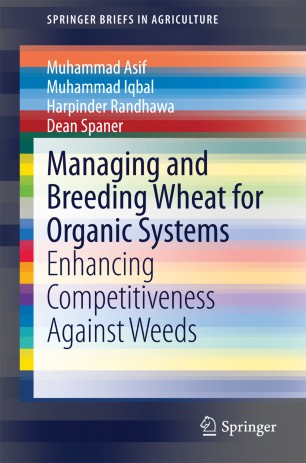 Part of the SpringerBriefs in Agriculture book series (BRIEFSAGRO)

Genetically uniform cultivars in many self-pollinated cereal crops dominate commercial production in high-input environments especially due to their high grain yields and wide geographical adaptation. These cultivars generally perform well under favorable and high-input farming systems but their optimal performance cannot be achieved on marginal/organic lands or without the use of external chemical inputs (fertilizers, herbicides and pesticides). Cereal breeding programs aim at evaluating candidate lines/cultivars for agronomic, disease and quality traits in a weed free environment that makes it impossible to identify traits conferring competitive ability against weeds. Moreover, quantification of competitive ability is a complex phenomenon which is affected by range of growth traits. Above (e.g. light) and below (e.g. water and nutrients) ground resources also influence competitiveness to a greater extent. Competitiveness is quantitatively inherited trait which is heavily influenced by many factors including genotype, management, environment and their interaction. Sound plant breeding techniques and good experimental designs are prerequisites for maximizing genetic gains to breed cultivars for organically managed lands. The brief is focused on breeding wheat for enhanced competitive ability along with other agronomic, genetic and molecular studies that have been undertaken to improve weed suppression, disease resistance and quality in organically managed lands. The examples from other cereals have also been highlighted to compare wheat with other cereal crops.