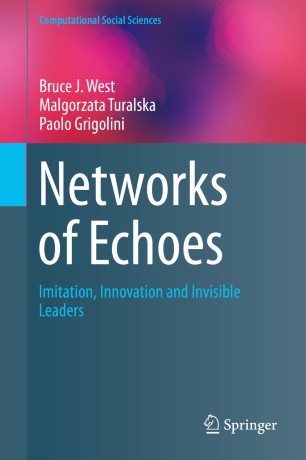 Networks of Echoes: Imitation, Innovation and Invisible Leaders is a mathematically rigorous and data rich book on a fascinating area of the science and engineering of social webs.  There are hundreds of complex network phenomena whose statistical properties are described by inverse power laws.  The phenomena of interest are not arcane events that we encounter only fleetingly, but are events that dominate our lives. We examine how this intermittent statistical behavior intertwines itself with what appears to be the organized activity of social groups.  The book is structured as answers to a sequence of questions such as: How are decisions reached in elections and boardrooms?  How is the stability of a society undermined by zealots and committed minorities, and how is that stability re-established?  Can we learn to answer such questions about human behavior by studying the way flocks of birds retain their formation when eluding a predator?  These questions and others are answered using a generic model of a complex dynamic network—one whose global behavior is determined by a symmetric interaction among individuals based on social imitation. The complexity of the network is manifest in time series resulting from self-organized critical dynamics that have divergent first and second moments, are non-stationary, non-ergodic, and non-Poisson.  How phase transitions in the network dynamics influence such activity as decision making is a fascinating story and provides a context for introducing many of the mathematical ideas necessary for understanding complex networks in general.  The decision making model (DMM) is selected to emphasize that there are features of complex webs that supersede specific mechanisms and need to be understood from a general perspective.  This insightful overview of recent tools and their uses may serve as an introduction and curriculum guide in related courses.