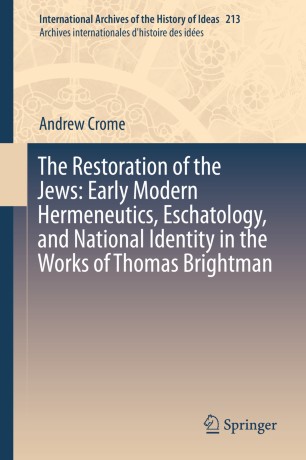 The Restoration of the Jews: Early Modern Hermeneutics, Eschatology, and National Identity in the Works of Thomas Brightman

This book offers the first detailed examination of the life and works of biblical commentator Thomas Brightman (1562-1607), analysing his influential eschatological commentaries and their impact on both conservative and radical writers in early modern England. It examines in detail the hermeneutic strategies used by Brightman and argues that his method centred on the dual axes of a Jewish restoration to Palestine and the construction of a strong English national identity. This book suggests that Brightman’s use of conservative modes of “literal” exegesis led him to new interpretations which had a major impact on early modern English eschatology. A radically historicised mode of exegesis sought to provide interpretations of the Old Testament that would have made sense to their original readers, leading Brightman and those who followed him to argue for the physical restoration of the Jews to the Holy Land. In doing so, the standard Reformed identification of Old Testament Israel with elect Christians was denied. This book traces the evolution of the controversial idea that Israel and the church both had separate unfulfilled scriptural promises in early modern England and shows how early modern exegetes sought to re-construct a distinctly English Christian identity through reading their nation into prophecy. In examining Brightman’s hermeneutic strategies and their influence, this book argues for important links between a “literal” hermeneutic, ideas of Jewish restoration and national identity construction in early modern England. Its central arguments will be of interest to all those researching the history of biblical interpretation, the role of religion in constructing national identity and the background to the later development of Christian Zionism.

Much has been written about seventeenth-century English apocalyptic thought, but Crome's patient and judicious analysis of Thomas Brightman breaks new ground. It succeeds in laying bare the hermeneutical logic that fuelled the rise of Reformed Judeo-centric millennialism. The book deserves a wide readership among scholars concerned with the history of biblical interpretation, Protestant eschatology, English national identity, and Christian Zionism'.  - Professor John Coffey, Professor of Early Modern History, University of Leicester

Andrew Crome's ground-breaking study of Thomas Brightman offers a new and sometimes surprising account of the development of millennial thinking in and beyond early modern England. This masterly account demonstrates the extent to which an emerging Zionism supported an emerging English nationalism, while outlining the historical roots of some of the most important of contemporary geopolitical themes." - Professor Crawford Gribben,  Professor of Early Modern British History, Queen's University Belfast

This important study provides a new examination of Thomas Brightman's hermeneutical method, particularly his ideas on the restoration of the Jews.  The author's thorough analysis of Brightman's approach also has more general and wider implications for understanding the development of English apocalyptic interpretation into the later seventeenth-century.' - Dr Warren Johnston, Associate Professor of History, Algoma University