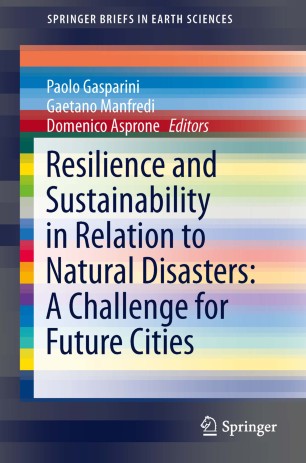 Resilience and Sustainability in Relation to Natural Disasters: A Challenge for Future Cities

The number of megacities worldwide is rapidly increasing and  contemporary cities are also expanding fast. As a result, cities and their inhabitants are becoming  increasingly vulnerable to the effects of catastrophic natural events such as extreme weather events (recently more frequent and intense as a result of the ongoing climate changes), earthquakes, tsunamis or man-induced events such as terrorist attacks or accidents. Furthermore, due to increasing technological complexity of urban areas, along with increasing population density, cities are becoming more and more risk attractors.

The resilience of cities against catastrophic events is a major challenge of today. It requires city transformation processes to be rethought, to mitigate the effects of extreme events on the vital functions of cities and communities. Redundancy and robustness of the components of the urban fabric are essential to restore the full efficiency of the city's vital functions after an extreme event has taken place. These items were addressed by an interdisciplinary and international selection of scientists during the 6th UN-World Urban Forum, that was held in Naples, Italy in September 2012.

This volume represents in six chapters the views from sociologists, economists, and scientists working on natural risk and physical vulnerability on resilience and sustainability for future cities in relation to natural disasters.