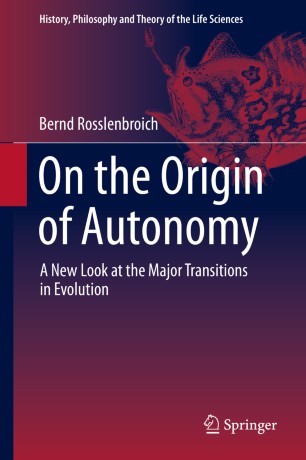 On the Origin of Autonomy

A New Look at the Major Transitions in Evolution

Part of the History, Philosophy and Theory of the Life Sciences book series (HPTL, volume 5)

This volume describes features of biological autonomy and integrates them into the recent discussion of factors in evolution. In recent years ideas about major transitions in evolution are undergoing a revolutionary change. They include questions about the origin of evolutionary innovation, their genetic and epigenetic background, the role of the phenotype, and of changes in ontogenetic pathways. In the present book, it is argued that it is likewise necessary to question the properties of these innovations and what was qualitatively generated during the macroevolutionary transitions.

The author states that a recurring central aspect of macroevolutionary innovations is an increase in individual organismal autonomy whereby it is emancipated from the environment with changes in its capacity for flexibility, self-regulation and self-control of behavior.

The first chapters define the concept of autonomy and examine its history and its epistemological context. Later chapters demonstrate how changes in autonomy took place during the major evolutionary transitions and investigate the generation of organs and physiological systems. They synthesize material from various disciplines including zoology, comparative physiology, morphology, molecular biology, neurobiology and ethology. It is argued that the concept is also relevant for understanding the relation of the biological evolution of man to his cultural abilities.

Finally the relation of autonomy to adaptation, niche construction, phenotypic plasticity and other factors and patterns in evolution is discussed. The text has a clear perspective from the context of systems biology, arguing that the generation of biological autonomy must be interpreted within an integrative systems approach.