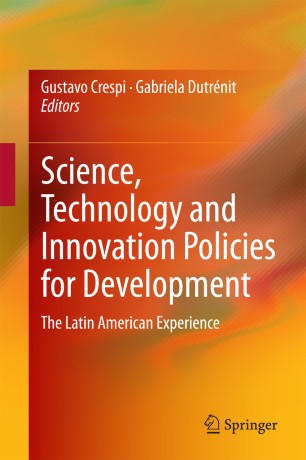 This book examines the implementation of science, technology and innovation (STI) policy in eight Latin American countries and the different paths these policies have taken. It provides empirical evidence to examine the extent to which STI policies are contributing to the development of the region, as well as to the solution of market failures and the stimulus of the region’s innovation systems.

Since the pioneering work of Solow (1957), it has been recognized that innovation is critical for economic growth both in developed and in less-developed countries. Unfortunately Latin America lags behind world trends, and although over the last 20 years the region has established a more stable and certain macroeconomic regime, it is also clear that these changes have not been enough to trigger a process of innovation and productivity to catch-up. Against this rather grim scenario there is some optimism emerging throughout the region. After many years of inaction the region has begun to invest in science, technology and engineering once again. Furthermore, after many changes in innovation policy frameworks, there is now an emerging consensus on the need for a solution to coordination failures that hinder the interaction between supply and demand.

Offering an informative and analytic insight into STI policymaking within Latin America, this book can be used by students, researchers and practitioners who are interested in the design and implementation of innovation policies. This book also intends to encourage discussion and collaboration amongst current policy makers within the region.